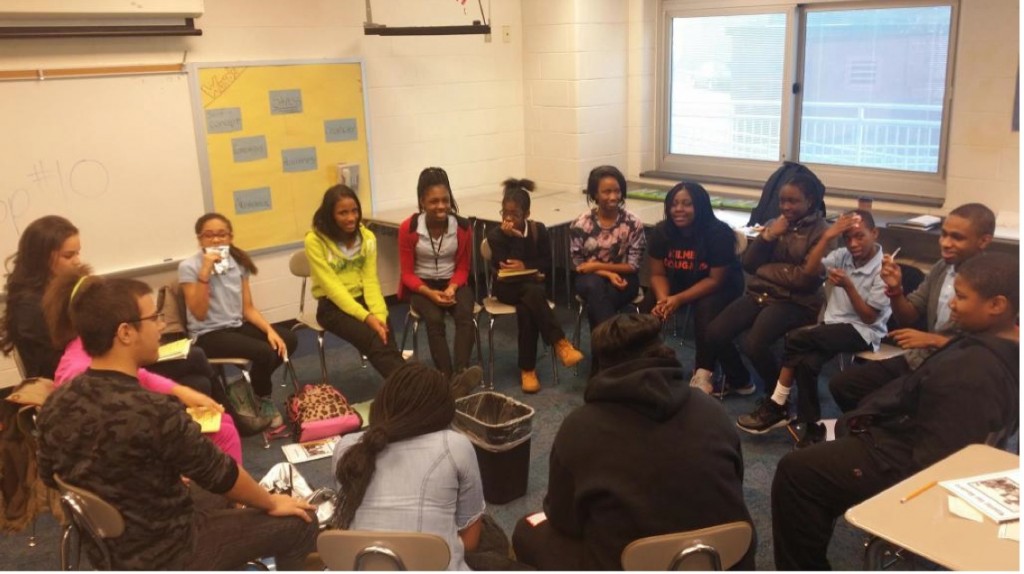 Lawrenceville, NJ – February 23, 2015 – State Farm awarded a generous check for $7,000 to Minding Our Business, Inc. (MOB), a nonprofit organization that has been recognized as one of the premier youth entrepreneurship programs in the nation, to support its after school programming in the Trenton School District.

MOB began in 1997 as a community outreach program of Rider University’s College of Business Administration and received its own 501(c) 3 designation in November 2012. Since its launch, MOB has coached and mentored more than 3,000 students on starting and running their own businesses. The grant award from State Farm will be used by MOB to operate its after-school Service-Learning program to middle school students in Trenton.

“Without supporters like State Farm, this program may not have occurred this school year,” said Dr. Sigfredo Hernandez, MOB’s Co-Founder and Treasurer. “Due to the school district budget constraints, MOB only received $5,000 of the needed $20,000 for the program. The generosity of State Farm as well as a sizeable grant award from Sam’s Club helped make up the difference due to the freeze,” Dr. Hernandez added.

Teanice Wells-Ernest, a State Farm agent in Trenton, served as a MOB business competition judge last year. She shared, “State Farm believes that all children deserve an education that helps them reach their potential and prepares them for life. Our support goes to programs that provide students the instruction, resources, and support they need to succeed. We are very proud to support the MOB program.”

The MOB Service-Learning Program began on February 3 at Kilmer, Rivera and Dunn Middle Schools in Trenton and currently has 130 students enrolled. During these sessions that run for 12 weeks, students will learn the ins and outs of running their own business. Sessions will focus on introducing students to entrepreneurship and cover pertinent topics including teamwork, advertising, branding, and the development and presentation of a business plan. Each student will be given start-up money for their business endeavor. Toward the end of the program, students will participate in Market Fair Day, held on Saturday, April 18 at Kilmer Middle School, in which they have the opportunity to promote their products and services to potential buyers and investors. State Farm will be recognized for their support of MOB during a ceremony at Market Fair Day.

Because of the success of the Service-Learning Program, MOB is piloting this program in two more cities in New Jersey — Asbury Park and Perth Amboy. “When you have community partners, with brand appeal like this, it allows us to broaden our entrepreneurial and academic initiatives while serving more of the community,” said Kevin Wortham, Executive Director of Minding Our Business.

State Farm and its affiliates are the largest provider of car insurance in the U.S. In addition to providing auto insurance quotes, their 18,000 agents and more than 65,000 employees serve over 82 million policies and accounts – nearly 80 million auto, home, life, health and commercial policies, and nearly 2 million bank accounts. Commercial auto insurance, along with coverage for renters, business owners, boats and motorcycles, is available. State Farm Mutual Automobile Insurance Company is the parent of the State Farm family of companies. State Farm is ranked No. 41 on the 2014 Fortune 500 list of largest companies. For more information, please visit http://www.statefarm.com.