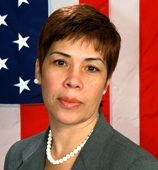 Francis Blanco is the former CEO of The Living Hope Empowerment Center in Trenton, NJ. She is currently the Chief of Staff of the Mayor of Trenton, Hon. Eric Jackson.

Tracey D. Syphax is Vice President of Phax Group Construction 8: Design LLC. Mr. Syphax is Co-Chairman of the Board of the African American Chamber of Commerce of New Jersey. Mr. Syphax is also the Co-Chair of the Trustee Board at Union Baptist Church. Mr. Syphax is a Board Member of Capitol City Redevelopment Corporation appointed by Governor Chris Christie over seeing millions of dollars in construction around the Capitol District.

Debbie Schaeffer is the third generation owner and President of Mrs. G’s TV and Appliances for the last 13 years. Prior to owning Mrs. G’s, she has been a self-employed residential builder and a Developer at Mansion Hill Estates. Debbie is also a firm believer in and frequent supporter of local community and charities. Debbie received her Bachelor of Science in Civil Engineering from the University of Michigan.

Kevin is the oo-founder of MOB, Lead Entrepreneurship Instructor of the MOB Summer Program since 1997 and has directed the MOB Advanced Program since 2004. Previous work includes being a Trainer/Teacher in Entrepreneurship for the National Foundation for Teaching Entrepreneurship in New York City. He is a Trustee of the Turning Point United Methodist Church in Trenton, NJ. He obtained a Bachelor in Science with a concentration in Urban Studies from the University of Pittsburgh in 1987.