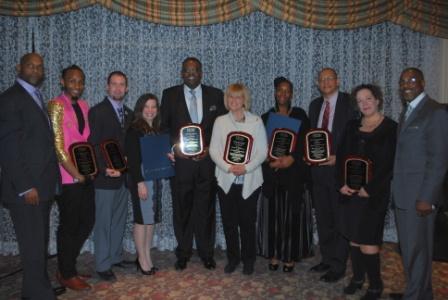 “Minding Our Business began at Rider University with a passionate dream to instill business concepts and skills in local at-risk youth,” explains Kevin Wortham, MOB Co-founder and Executive Director. “Now that we’ve earned our independent nonprofit status, we are working hard to fundraise, friend-raise, and do all we can to broaden and enhance our entrepreneurship, academic and mentoring initiatives. Our vision is to become the leading model for service learning and summer learning in entrepreneurship for urban youth nationally!

Receiving honors and gratitude at the dinner were:

·        Parent of the Year:Cebrina Caryn Banks Eke, a Hamilton, NJ, resident who has served as a class mother and had all three of her children participate in the MOB program.

·        Tracey Syphax Spirit Award: John Harmon, a Trenton native and resident who is the current President and CEO of the African American Chamber of Commerce of New Jersey.

·        Innovator of the Year: Dale Caldwell, a New Brunswick resident and current Head of School and Chief Executive Officer of the Village Charter School in Trenton.

·        Outstanding Citizen of the Year: Dr. Sharon Rose Powell, a Princeton resident, psychologist and MOB volunteer, and the founding President of the Princeton Center for Leadership Training (now The Center for Supportive Schools).

For further information about Minding Our Business, and/or to donate to support its efforts, please visitwww.minding-our-business.com or call Executive Director Kevin Wortham at 609-731-9311.